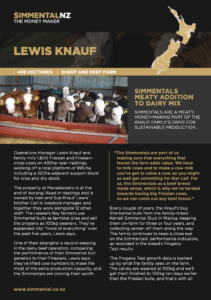 SIMMENTALS ARE A MEATY, MONEY-MAKING PART OF THE KNAUF FAMILY’S DRIVE FOR SUSTAINABLE PRODUCTION.

The property at Maraekakaho is at the end of Aorangi Road in Hastings and is owned by Ivan and Sue Knauf. Lewis’ brother Carl is livestock manager, and together they work alongside 12 other staff. The Hawke’s Bay farmers use Simmental bulls as terminal sires and sell the progeny as 100kg weaners. They’ve expanded into “more of everything” over the past five years, Lewis says.

One of their strengths is record-keeping in the dairy beef operation, comparing the performance of their Simmental bull genetics to their Friesians. Lewis says they’ve lifted cow numbers to make the most of the extra production capacity, and the Simmentals are proving their worth.

“The Simmentals are part of us making sure that everything that leaves the farm adds value. We have to milk cows and to make a cow milk you’ve got to calve a cow, so you might as well get something for that calf. For us, the Simmentals as a beef breed made sense, which is why we’ve tended towards having big Friesian cows, so we can calve out any beef breed.”

Every couple of years, the Knauf’s buy Simmental bulls from the family-linked Kerrah Simmental Stud in Wairoa, keeping them on-farm for three or four years, and collecting semen off them along the way. The family continues to keep a close eye on the Simmentals’ performance indicators, as recorded in the breed’s Progeny Test results.

The Progeny Test growth data is backed up by what the family sees on the farm. The calves are weaned at 100kg and we’ll get them finished to 100kg ten days earlier than the Friesian bulls, and that’s with all the same feed. The guys that we sell them to say they keep on growing well, and those guys keep coming back for the progeny.”

They usually earn a sale yard premium of $100 with the Simmentals compared to Friesian bulls or any other beef animals. That premium can change between seasons, depending on what people are willing to pay for them, “but once they’re in the yards and you’ve got a name around who you are, you get the repeat customers because they know what they’re getting.”

The Knauf’s calve twice a year, and the Simmentals performed strongly in the last calving round in April, where Lewis had them ad-lib feeding milk and hay.

“So far this calving they’re drinking 50 percent more milk and putting on a lot more weight.”

The hay was in the meal mix to avoid scouring problems, though the Simmentals barely rate a mention for that. “You can chuck as much food at them as you like, and so far, they’re taking it on and growing.”

Criticisms of poor docility have faded over the years, Lewis says. “Our only complaint on temperament is sometimes they are too quiet and difficult to get to move.”

In 2017 the Knauf’s bought a neighbouring farm and have been trying to put in more irrigation and irrigation storage. The dairy farm is classed as System 5, meaning it uses a high proportion of supplementary feed compared to grass. The mainstay of the Knauf’s supplementary feed is maize silage grown on farms and fodder beet. Combined the maize and beet make up 40% of the cows’ diet and another 40% is their grass, the remainder is imported feed.

Their rationale for System 5 is a drive for sustainable production and herd management. “We want to grow as much as we possibly can with the irrigation which costs the same money to install and run, no matter what’s growing. And the second thing, which started us on that System 5 track, was nitrogen. The grass had higher protein than the cows needed, and 16% of protein is nitrogen. So, to cut down on how much nitrogen you have, it actually pays to cut down on how much grass and how much protein you have.”

“It’s lifted milk production and cow numbers, but it was all based on trying to cut down on N use for more efficiency.”

The family sell about 400 to 500 Friesian bull calves a year and 200 to 300 Simmental-cross, depending on the number of terminals [cull] Friesian cows they have at mating. Running a ruler over income sources, Lewis says proportionately, the Simmental and Friesian calves contribute a total combined equivalent of $0.50/kg milk solids to the farm’s revenue.

“And again, this is part of our strategy to get as much out of our animals as we can,” Lewis says.