One Winter, Not Two. 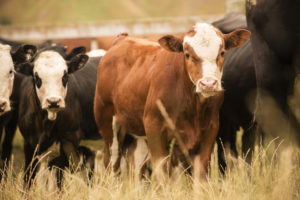 The Simmental breed has long been known for its growth and carcass attributes – a reputation that was further validated last year in Beef and Lamb’s Beef Progeny Test (BPT) results.

With the right genetics and the right management, Simmental or Simmental cross calves are very capable of reaching optimal slaughter weights, without the need to be grown out through a second winter.

When looking at the beef value chain in full, there is a strong reliance on progeny that grow consistently well from birth to slaughter – and this is important for a number of reasons.

The first obviously comes down to dollars – both cost and profit. With New Zealand’s predominant meat payment system being weight based, this automatically positions growth as the key economic driver for any beef operation.

In any slaughter animal, the aim is to produce the maximum kilograms of beef at the fastest rate, whilst always meeting market carcass specifications.

With Simmental renowned for finishing at higher weights, and faster, this provides a favourable outcome in terms of the bottom line. By reaching slaughter rate after just one winter, and even more ideally by around December, you can position yourselves to take advantage of premiums on offer.

By finishing cattle faster, the cost savings in food are also significant – the longer you need to feed an animal, the higher the cost to you as a farmer.

By reaching slaughter rate sooner, you can position yourselves to sell on before needing to outlay further capital for the next season’s weaners, thus providing more oversight of cash flow. On top of this, the longer you need to keep hold of calves, the more at the whim of the markets you become. You may forecast off the current $/kg of carcase only to have that drop by the time your calves reach slaughter weight.

Easier on the Land

Maintaining food over winter is a challenge in itself, not to mention the impact on pastures having heavier cattle grazing during the months when we are prone to pugging on clay-based soils.

Another important consideration in today’s climate is the impact of beef production on the environment. The agricultural sector is increasingly copping slack for its contribution to the release of greenhouse gas emissions.

With the ability of the Simmental breed to finish faster, cattle in effect produce less methane in their lifetime than those breeds that take longer to grow out. With less methane production per animal that also translates to less methane per kilogram of beef product. The world’s growing population still needs to be fed but if we as farmers can be seen to be actively working towards less environmental impact, the better positioned we are to defend our livelihood.

There you have it. For any beef finishing operation, you can’t go past the Simmental influence – that’s why we call it the Money Maker.