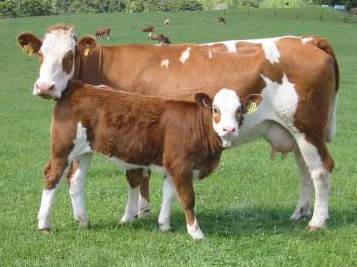 At Oakdale we aim to breed quiet, structurally correct animals, with good natural fleshing, growth rates and preferably polled. Cattle are run on a commercial basis.
Owing to growing demand, a number of bulls are sold as yearlings by Private Treaty. As one of the larger Simmental studs, Oakdale has a wide genetic base and greater numbers of progeny available for bull buyers.

The stud started in 1997 – with the purchase of three registered heifers – and is located in the Far North district, approximately 23 kms South of Kaikohe (or 50 minutes drive from Kerikeri or Whangarei.). It has since expanded and is now the largest registered Simmental stud in Northland.

217 hectares (200 effective), consisting of mainly rolling to medium hill contour, with some steeper gullies and hills at the back of the farm. The soil type is semi-volcanic.

150 ewes. In addition, progeny from ewes and cows – not kept as replacements or sold as breeding stock – are finished on farm.

A combination of Natural and AI mating is carried out – using the best of local and overseas genetics. In 2009, calves were sired by 18 different bulls (9 overseas [AI] and 9 NZ born bulls).